Moms and dads of toddlers and young children out there, this post is for you.

I love Kanban (a lean method for developing software with an emphasis on just-in-time delivery while not overloading software developers). I use it every day at work, and I use it every week at home. This past week something incredible has happened to me. I used simplified Kanban to organize my toddlers’ morning routine, and it has worked so amazingly well that it has exceeded all my expectations.

This post is to share my experience on how using a simplified version of Kanban with my kids has turned a dreadful morning routine into a bliss. If you would like to know more about Kanban for software development, check out my other Kanban post.

Last Sunday, after having thought about this for weeks, I told my 4 year old, Mar, that I wanted to make a cool board for our mourning routine with her, and asked her about what things we need to get done in the morning before leaving for school. We took scratch paper and started doodling each task: wake up, get dressed, have breakfast, clean-up (I wasn’t expecting that one!), put our shoes on. Ok, that will do to start.

When designing the Kanban board, my main goal was to reduce the amount of drama and increase overall happiness, even more so than increase speed. So I turned Mar’s list into 6 cards with a drawing that represented each one of the following tasks: 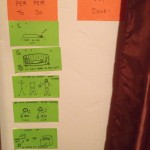 Kanban board reset and ready to go

Having not had many nights of good sleep for the past 4.5 years, the first two tasks were mostly to increase my own happiness. I was hoping that perhaps by visualizing them, I would eventually get them to see that this was something they needed to work on. And maybe, just maybe, in one month or so they would eventually manage to sleep in their beds all night, at which point I would be allowed to call this project a success to myself.

Since the rest of the tasks shouldn’t take more than a few minutes, I decided to just have two columns to start: TO DO and DONE, and not include a middle “In Progress” column. 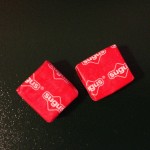 I explained the simple mechanics to Mar: If you get all your cards on the DONE column before leaving for school, you will get a sugus. (They had been asking me for candy every morning, and I had not been able to come up with a good reason not to give it to them. One candy for a good night sleep seemed like fair price to pay).

Mar placed all the cards under the TO DO column, she immediately started working on her tasks. She turned to Maia, who is 2 years old, and told her: “Let’s get dressed, that way we’ll have more… more… happiness!”. After getting dressed, Mar convinced Maia to clean up (!!!), she even put her shoes on, even though we were not really going out just yet. Wow! not too bad for a start. The best part was that I did not have to say a word. She just did it, and moved each card to DONE as she completed each task. She examined the board and stared at the two sleeping tasks in the TO DO column. She turned to me and told me that she was going to sleep in her bed the entire night. I smiled with a vague sense of hope.

Ok, so it seemed to be working really well for Mar, but what were the chances it was going to work for Maia? She is only 2, and probably doesn’t even understand what we’re trying to do…

6am… and no kids in sight! Could this be happening? Mar popped her head into our room and asked if it was morning already. I gave her a big morning hug and praised her on how well she had done by sleeping in her own bed the entire night. Maia woke up and said: I did it! I couldn’t believe what was happening. My dreams had already come true!
Mar rushed downstairs to move the sleeping card to DONE and came back up to get dressed. No crying, no drama. 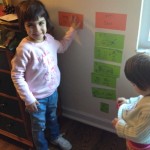 She got dressed quickly and rushed downstairs again, another card moved to DONE. “Maia, let’s have breakfast!” They both had breakfast, again without drama, and ran to move their card to DONE. “Clean up!” (this wasn’t happening to me!!!), Mar diligently made sure everything was put away and proudly moved the clean-up card. “Maia, we need to put our shoes on”, and so they did finishing all their tasks 30 minutes before the time we usually leave the house!

100% success on the first morning! And I didn’t even have to tell them what still needed to get done

Each got one sugus, they had finally earned it! 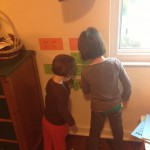 Mar helping Maia to move her sleeping card to DONE

(Having gone out to a concert the night before, I was pretty sure that they would make me pay for it dearly by coming to my bed in the middle of the night.)

6am… and no kids in sight! I had a weird groundhog day feeling… could this be happening again? 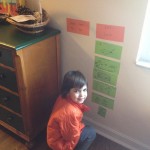 And so it did, but this time they cleaned up before breakfast, so it wasn’t in the same order, but they again completed all the tasks well before it was time to leave for school!
Hard to believe but true! 2 days in a row!!! They feel empowered and in control. And no more crying and morning fights! 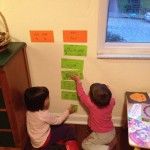 Each moving their cards

Woke up earlier than usual since we needed to be at school at 7:30 to make an 8am doctor appointment, was it possible to stress the system so soon and still get good results? 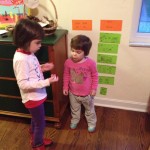 The 3rd time is the charm… again! Yes, they did it again, in front of my astonished eyes, they woke up after a good night’s sleep in their own beds and proceeded to complete their tasks one after another. Finished bright and early and headed out with plenty of time. They both were the first kids in their classes. Wow x 3! 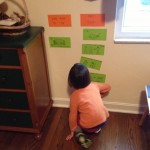 There is a limit as to how much self control a 2 year old can exhibit, and for Maia, 3 days was it. In her defense, she had been not feeling too well, but the fact is, she came to our bed multiple times and ended up sleeping there most of the night. My dream had lasted way longer than I had anticipated, so I was ok with that.

Mar, on the other hand, was able to stick with it yet another night, GO MAR! 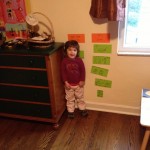 After waking up, all proceeded as usual in my new groundhog day morning routine. I did not have to tell them what they still had to do, they kept going to the board and doing the next thing until everything except Maia’s sleeping card was in the DONE column.

When it was time to give Mar her sugus, Maia also wanted one. I had to explain to her, she did not earn hers today as she had not slept in her bed. She threw a fit, as expected, but got over it more quickly than usual. 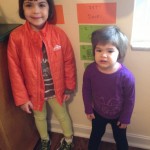 At 6:01 am Maia came to our room and asked “Ara si?” (And now?). She hopped in and fell asleep right next to me shortly after. I can live with one hour of cuddling in the morning

Mar woke up shortly after that and followed me downstairs, where I had started to write this blog. I knew something incredible had just happened: 1 whole week for Mar and 4 nights for Maia on the first attempt!

When I told her I was super proud of her achievement, she looked at me with surprise: “really? 5 days?”

Tricks and tips… or why I think it works

I’ve been thinking about why it’s working so well all week, and I believe these are the key factors of success:

Granted, a 2 year old needs way more encouraging than a 4 year old, but all it took for Maia was to remind her that she had to sleep in her bed if she wanted a sugus in the morning, and she would wake up with a smile on her face saying “candy!”, so that was enough for her (at least 4 out of 5 nights).

Making sure nothing was blocking their progress was also key to their success. My only job was ensure they had clothes they could wear handy and have breakfast ready on time, which I do anyway.

Kanban is so much more….

It was tempting for me to throw in all the bells and whistles Kanban has to offer, but after a week of running it, I am happy to confirm that this was just the right amount of Kanban for my kids to start.

However, I did introduce a couple slightly more advanced features. Note that most tasks are individual (4 for Mar and 1 for Maia), with one joint task (breakfast) and one generic one (clean up). This is by design, as I wanted to pick a relatively easy task that had natural dependencies for them to work on getting done together. If they don’t poke at each other and don’t fight with each other during breakfast, they both win and get to move the card to DONE. Both Mar and I know that the clean up card is primarily meant for Mar, as she is the one who usually does it (the most we get out of Maia is her singing along the clean up song, while she continues to play with whatever toy she is supposed to put away). Leaving it generic though, allows Maia to be included once she is ready to start helping more, and doesn’t make Mar feel she is doing Maia’s job.

Because of the nature of the tasks, as well as my kids’ ages, once they wake up, the Kanban board has a natural WIP limit of 1. That is, if there was a middle “In Progress” column, there would only be one card there at any given time. So, as it turns out, I did not need a middle column to force them to focus on just one task. Remember, keep it simple!

If Maia had been a little older, I would have loved to add a global constraint that unless all the tasks were in DONE, none of them would get candy. The goal would be to nudge them to encourage each other and want to help each other, since they would be in it together, either they both win or they both lose. However, imposing this constraint on the system right now would have been unfair for Mar, so I am saving it for a future iteration of the board. Maybe in one year they will be ready for this challenge.

I anticipate that once they are able to get this board done with their eyes closed, it will be time to change things up, by adding new elements to it, and maybe even new tasks (Mar already pointed out that we needed a card for brushing teeth). The beauty of Kanban is that it changes over time, little by little. It’s a tool for evolutionary change and continuous improvement. If they keep it up, Mar and Maia will immediately know what they are not getting done and will be able to focus their energy on that the next day.

If you are a parent who dreads mornings, or any other part of the day/week, try simplified Kanban with your kids and let me know how it works for you.

Good luck and don’t forget to have fun with it!